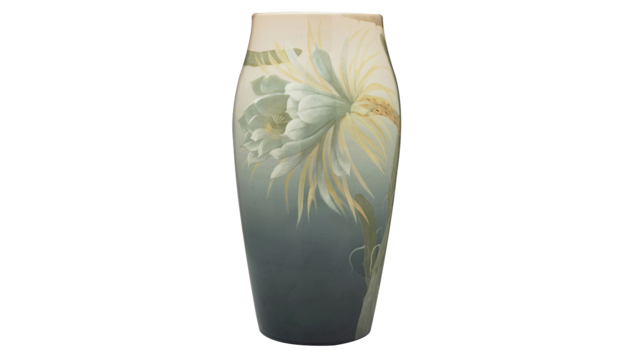 Art Nouveau European glass is being sold, including an exceptional collection of Loetz, as well as pieces by Daum, Galle, Muller, Rene Lalique, and Burgun & Schverer. A large and impressive Daum lamp is also available, along with a rare and extremely fine Loetz lamp. American Art Nouveau glass in this auction includes works by Louis C. Tiffany and Steuben. Several Tiffany Studios lamps are included as well as their metalwork including various desirable picture frames. Some outstanding lamps include Handels, a rare Pairpoint with glass base and shade with nautical scene and one of the finest Jefferson reverse painted lamps available. A Unique wisteria lamp is being offered and its as nice an example of that model that you will find.

Lighting features a Unique Wisteria Lamp, expected to bring $8,000 to $11,000, as well as a nautical Daum lamp for $6,000 to $8,000. A number of Handel lamps along with a nicely executed Jefferson lamp are also being offered.

A monumental Rookwood  vase by Carl Schmidt is estimated to bring $25,000 to $35,000, along with a number of other decorative Arts & Crafts examples from Rookwood as well as early Cincinnati pottery by Matt Morgan, Cincinnati Pottery Club and T J Wheatley. Other Ohio pottery examples include pieces of Roseville, Weller, Clewell and Owens.

A Netsuke Erotica collection rounds out the selection of offerings.

The auction begins at 11AM EST Sunday May 16th. All lots are available for preview. Please call 513-321-6742 or ellie@treadwaygallery.com to arrange a time for private viewing. The sale will be closed to the public but there will be bidding via phone, absentee, and the internet via Live Auctioneers and Invaluable.

As usual, everything is guaranteed and shipping is available worldwide.